As I wrote earlier I dusted off an old Minmatar Character to participate in the Factional Warfare. So far it’s often been fun, when we’re chasing wartargets and / or getting ready for big fights. But also sometime boring, taking a few complexes in a system and waiting out the timers isn’t really the most exciting thing Eve has to offer. A patch a few days back also decreased the standings gain for each takeover quite abit. Furthermore you get less standings gain the higher your rank is. I am now around 6.9 with the factional warfare corp. The minmatar standing will come in handy though, they have some very nice (regular) Mission Agents, and the offers from their LP store are a lot more interesting than those from the Caldari corporations. 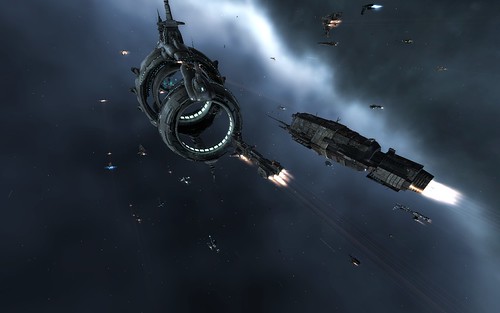 Anyway, I was in a few nice battles the past week or so. Last friday CVA came to aid the Amarr cause. After a lot of cat and mouse, our scouts had found out they brought a BS fleet assisted by Guardians. The names of the guardians were notted down as primaries, and after a pretty long battle we won ! Several of their Battleships and a command ship went down, while we didn’t suffer as much losses.A few days ago, there was a similar fight, but in that one I was totally lagged out. We warped into thirty or more amarr ships at a gate. They almost all had their drones out, which didn’t help much. My screen simply froze as my Rupture entered the grid, and by the time I was back I was halfway thru my armor. I managed to release my drones somehow, and they got me on two killmails, dissing out over 1000 dmg ;). But a few seconds later I was totally in hull and my ship about to explode. And I was in that state for more than two minutes i think. Then all of a sudden my pod was in a belt (i had frantically been clicking the warp button). So I missed most of the fight, but I think they lost several heavier ships and we lost mainly frigs and cruisers. There sure were a truckload of wrecks at the gate. Earlier that day that same fleet had decimated the minmatar rag tag fleet of rifters and ruptures, so it was a nice revenge. Unfortunately I missed that one.I haven’t suffered many losses, just a bunch of ruptures and few rifters. especially to pirates I must say. Last night just wasn’t my evening though. I flew back to Rens in my Cyclone (already had that one for quite a while) to refit and get some extra ammo, while a fleet was forming to get rid of some pirates in Dal. Unfortunately no one had mentioned they were sitting on the Amamake gate, and i was pretty stupid for not asking their specific location. So I just jumped through that gate and almost got away, but someone locked me and scrambled, almost when I was warping out. I popped a short time later.

But that wasn’t all. I had already parked a few ships in Dal, so I picked up a rifter and proceeded to Huola. I had seen enough of Dal for the moment so I wanted to join another fleet there. A few jumps away I noticed a Trasher that was battling another soldier of the Minmatar, so I tried to help out, but wasn’t the smartest idea. The guy’s T2 artillery (amarr flying a Minnie ship :(), dealt a lot of dmg to my lone rifter and there I was in a pod again.I ended the evening by flying back to Rens and setting up two additional Ruptures to be blown up later ;). I noticed the Cyclones are only 20mil now in Rens, so I might be keeping one on standby as well, if we ever need something a bit bigger. I can also fly a Typhoon, but not sure I want to throw that out there at the moment :).