END_OF_DOCUMENT_TOKEN_TO_BE_REPLACED

In April our alliance started renting some 0.0 from TCF in Wicked Creek. After a somewhat rough start, we settled in and could get some ratting and mining (Arkanor and Gneiss) done, even though small gangs of bad guys (ie. Reds in 0.0 speak) entered the area.

But over the past six weeks or so, the situation worsened. There are now continuously gangs coming in and out. Clownpunchers, Bob, Pure, Goodfellows and what not, can come and go as they please. TCF defense is nowhere to be seen, and the locals aren’t strong enough to take on these organized gangs. And then there is also a few Goons from time to time, who are blue to TCF but red to most other people, which is then cause for lively debate on the security channel.

To make things worse, last month or so (or the month before) the rent was upped. From 200 to 250 a month. Plus you also have to rent an office for 100 mil a month. Our corp isn’t very big, so this was straining the corp wallet a bit. As paying 350mil a month for space you can hardly use doesn’t make a lot of sense, we decided to bail out a few weeks back. The carriers took back most important stuff (ie. nice loot from ratting etc) and we all sold off our ratting and mining gear. I guess we’re not the only ones, the market has taken a tumble now in Wicked Creek. Lots of other people leaving the area as well I assume, so no more 350mil a month for TCF.

All in all it was an interesting experience. To be honest 0.0 is not all it’s cracked up to be. I might make a blogpost about that soon. I especially find it very annoying that other people (ie. mainly the Reds) can dictate what I can and cannot do in game…

So where do we go from here ? I am doing missions, invention and some exploration in empire at the moment, and factional warfare with an alter ego. The corp is scattered about in empire at the moment, with most people doing their own thing. We have been looking into other 0.0 rental options, but haven’t found a very appealing one yet. So if you know something or can make me some sort of offer, I am all ears ;).

We have have been out here in Wicked Creek for six weeks or so and now that we’re more familiar with the area and it’s inhabitants, it’s getting a bit more comfortable. Having a few more ships to fly helps as well, my hulk is here now, and I got a cheap iteron IV to haul my stuff around. I also have been mining a bit, and the Arkanor, Dark Ochre and Gneiss is very nice. Combined with the recycled loot I almost have enough minerals for a Raven ! That will speed up the ratting a bit. The ratting is nice, as you can see in my wallet pic ;).

I have been mainly flying my Cerberus, and a Domi as well, but my skills arent geared towards that Domi so it was only a bit faster than the Cerb. Having a tractor beam is convenient though, the salvage is good. You get tritbars from the Angels, and I have been able to produce one Cargo Optimisation rig, and I am almost ready to make another one. 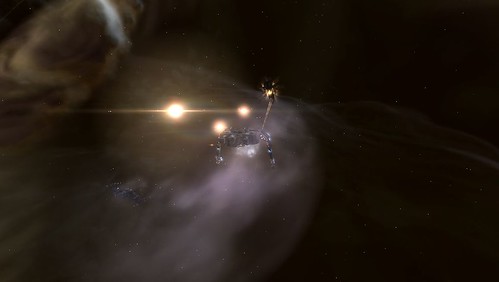 All in all, 0.0 is certainly growing on me, it has got me playing quite a lot more, though it’s getting a bit busy in our region now, so I am going to have to find a few more backwater systems for the ratting. Also there are still roaming gangs about. As I am writing this we have a DOOM gang outside the station :). 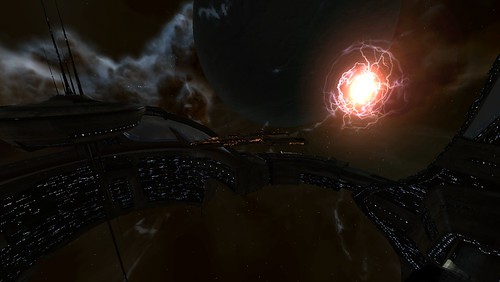