Let’s look at my eve year at the start of a new one :). Can’t quite remember what was going on at the start of the year, probably just some mining and missioning. And I started invention around the time. Mainly T2 drones, later on T2 shields. The income of that wasn’t too bad. And with the mission running that landed quite a bit of ISK.

The rakeriku corp was getting a bit rusty though, and a lot of people either left or didn’t log on anymore, new leadership and some diplomatic actions got us a place in Wicked Creek to liven things up a bit. This was in April. Quite a few members logged on more and we got some new ones as well.

Life in Wicked Creek was nice at first, but it got ugly pretty quickly. The novelty also wore off, as 0.0 isn’t that exciting, if you don’t pvp a whole lot. It’s good for the wallet though, made quite a bit of isk out there. Until it was too unsafe to undock and found myself spending most of my time in empire again. I think by july or so we pulled out. Haven’t kept track of the situation there at the moment, but I doubt it has improved. Missioned quite a bit after that and started to do more invention around the summer.

Also my alt Qanatas joined the Factional Warfare ! For a few months this provided quite a bit of enjoyment (general Beanflicker deserves a mention here, he setup quite a few nice fleets and was a very funny FC). Flying in fleets for the first time was interesting. Roaming about in small gangs was nice as well, somewhat more stressful as you had less people to fall back on.

Unfortunately the amarr enemy was hard to find at times, and the whole complex capping mechanic is so boring you want to pull your eyes out. The people I usually flew with started to fade away, and the whole concept got a bit boring. The FW alt is now retired for the time being. CCP doesn’t seem to be interested in this side of the game anymore. Even though it was touted at first that this was just the start, there is no indication anywhere that they will be expanding or changing the factional warfare concept…

Fall of this year saw the definite demise of the Rakeriku corp. Just about everybody has left or stopped playing. I don’t play a whole lot any more, have the feeling at the moment that there isn’t much new I can do, andÂ  I am a bit bored with what there is. I am not interested in some pvp 0.0 corp, with obligatory mining ops etc. Have plenty of ISK so no need to mission or mine at the moment.

So I am not sure what to do at the moment. Maybe tech 3 stuff will be interesting, and that should come in the march expansion. Though on CCP’s timetable it might be later. Hopefully it doesn’t need some extremely rare 0.0 components and it will be doable for regular empire dwellers as well. The wormhole exploration might be nice to do, but we’ll have to see how that game mechanic will be implemented.

My corp is now recruiting new members. You can read more on the official forum or at our own forums.

What we offer:
– A launch pad for those wanting to learn.
– We wont exploit you and force you to work for free.
– 0.0 access to some of the best ores (Arkonor) and ratting.
– Regular mission runners (who don’t mind folks tagging along).
– Plenty of salvaging for those folks not ready to join in the mission running.
– Carrier support for getting your gear in/out of 0.0
– Jumpclone access (both in empire and 0.0)

The ceo of Rakeriku and Otaku Invasion Carv stepped down due to being to busy a while back and the new Ceo Rag, wanted to blow some new life into our corp . The best way to do that was to go into 0.0 ! We have a close group of people in Eve, very skilled and knowledgable as well, but everybody was getting a bit bored and the corp was slowly dieing. So the move to 0.0 seem to be a logical one. Some people already had 0.0 experience and they’re helping us 0.0 noobs along, answering all our questions. 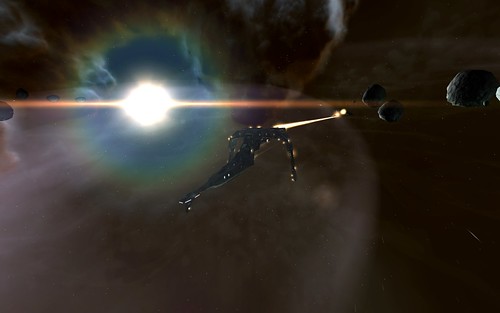 So yesterday we moved some of our stuff over by carrier jumps. I now have a sacrilige for Belautis and a cerberus for morph in 0.0. Have only done a little bit of ratting, and it looks good so far. Already made a few million and got my cargohold filled with loot (which isn’t too hard today). Wicked Creek has Angel rats, so explosive ammo seems to work best. Though on the cerb, due to bonuses, the kinetic missiles are nice. It takes a bit of time to take the big BS’s down, but as long as tanking isn’t a problem, it’s not too bad. Luckily Bela can help me out if I step into a 3 BS spawn, like I did today, they spawned right on top of me and had my heart skip a beat ;).

Ofcourse playstyle is a bit different out there. You have to keep your eye open on the security channel and local. And because you’re renting space, that doesn’t mean there are no pirates or people with ill-intend around. Already yesterday when I was just going to put up a Cyno for the last jump, two hostiles got into the system. But luckily they buggered off, so I was able to put the Cyno up in the end. 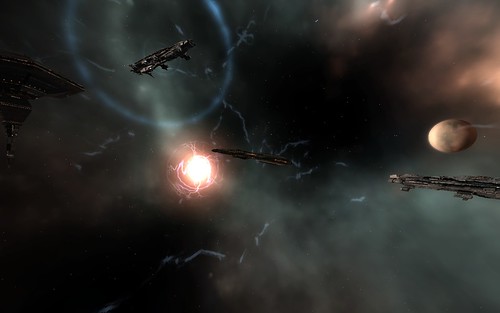 I am sure i’ll keep you all up to date on this new step in my Eve Career !

Two weeks ago The Otaku Invasion of which my corp Rakeriku is a member, was war-decced by Hooligans of War. A small pvp corp, looking for some kills in empire space. What they probably didnt know is that OI has quite a few experienced Eve players as members. The rakeriku industrial flag is no longer very accurate as some members do also engage in Pvp regularly or have done that in the past. So after the week the war was over, HOW had heavily underestimated the strength of OI. Some losses on our side, a few cruisers and frigs. On their side however, a few Hacs and recon ships. You can see the results on our killboard.

Thanks to Hitman47 some fights were recorded on video !

Unfortunetely, I logged on at the wrong times and managed to not be part of the action :(. I did fly around a bit in my Covops ships cloaked though ;).