When T3 came out first, I never thought Iâ€™d be interested in buying one. But now that the prices are dropping, itâ€™s becoming a lot more interesting. The Tengu hull now dropped below 400mil, and most of the submodules are now available at around 100mil, except for some of the more desirable ones.

I have been playing around with some Loki and Tengu setups in EFT and I must say there are a lot of interesting possibilities. You can go full out dps, create a cloaking blockade runner, or an allround exploration boat, like this one.

I just bought the T3 strategic cruisers skills, so Iâ€™ll be keeping my eye on the Tengu prices. Thing is with waiting, that sometimes you can keep on waiting. Sometimes you just gotta spend some isk, which I donâ€™t do a whole lot of, as I am a bit cheap ;).

A few weeks back I built some of these Ishtars, theyâ€™re still one of the more expensive HACs on the market, with a nice profit margin. I gave one of them to Bela so she can use it to assist me in lvl 4 missions for example.

Before you say OMG Just buy a domi, they have a bigger tank and are much cheaper !!111!!, yes I know, itâ€™s just a lot of fun flying HACs with their nice resistances and cruiser agility, and I had one at hand anyway ;).

There is a guide on the evelopedia that suggests setting up a passive tank. I guess it would look something like this (screen shot from EFT), though that guide suggests (way) more Shield Power Relays. I didnâ€™t actually try this one out, so you should experiment with this one yourself, in case you would try it. 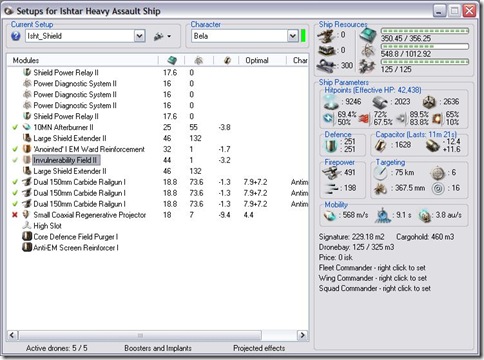 It does look decent, but I decided to go with a traditional armor tank. This leaves the mid slots for some nice extra modules like the Drone Navigation Computer and the Omnidirectional Tracking Link. 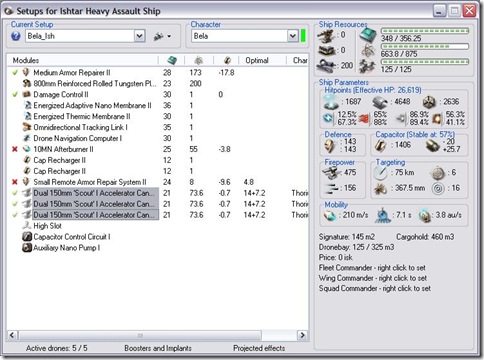 Also donâ€™t forget the small remote armor repairer module to rep up your drones in case they get hurt !

Tried this setup a few times now, and mission frigs get melted very quickly by the warriors or hobgobs, then itâ€™s onto cruisers with hammerheads II, and if there are any battleships left, the Ogre IIs mob them up. In case of aggro, I just orbit something with the AB on and donâ€™t get hit very hard.

Only tough thing to figure out a decent setup, is the lack of cpu on this ship, itâ€™s all pretty tight !

If you have any comments or suggestions, leave a commentâ€¦