As you might have read on the news or on the forums, there will be a fleet battle test on the test server coming Wednesday.

Apocrypha 1.5 is just around the corner and it brings plenty of improvements and fixes with it. We think you’ll be happy with the changes we’ve made; of course now we need to put it to the test in a “live-like” situation! To that end we will be running a series of fleet fights and other mass-tests on our main test server, Singularity.

I updated my test client today and did some testing. I put the T3 ship skills in both Bela and Morph’s queue. So I can test both caldari and amarr T3 ships, before I commit myself to a big purchase !

Rigs in all sizes

The new rigs are also on the test server. The small ones will be very cheap. You only need a few parts of salvage to make one (like 5 or 6, and that was on an unresearched bpo, not that that matter much with such small quantities). So I am sure just about every frig and cruiser will be rigged once this patch hits tranquility.Â  On the one hand it will give for more interesting setups, likeÂ  speed or armor rigs on your rifter, or double ambits ! Or a double trimarked trasher ! But it will be obligatory to rig your ships, otherwise youâ€™re bound to loose it when you come up against rigged ships.

Originally Rigging was supposed to give your ship a bit of extra oompf. For a price that is ! So if you wanted to you could rig your battlecruiser or assault frig. But now, it will become mandatory for the above mentioned reasons. Well itâ€™ll be interesting to see how it all will work out. Iâ€™ll be buying all the new bpos when I first logon after this patch comes out. 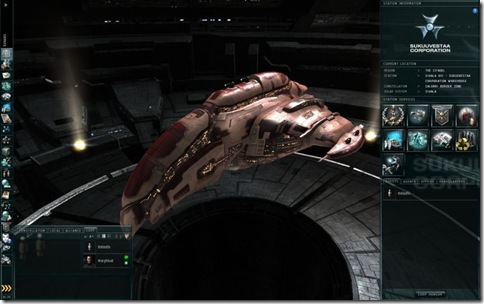 By the way, some graphics and icons changed as well. Belaâ€™s command ship is now pink :(, though itâ€™s not as obvious on the screenshot. Not exactly an improvement. The Guardian looks similar. Hope that will be changed.

UPDATE: The pinkish color is because I was using medium shaders at the time, apparently a known problem that hasn’t been fixed yet.