Here it is, in all it’s glory. Visiting a Customs Office near of a Lava planet. 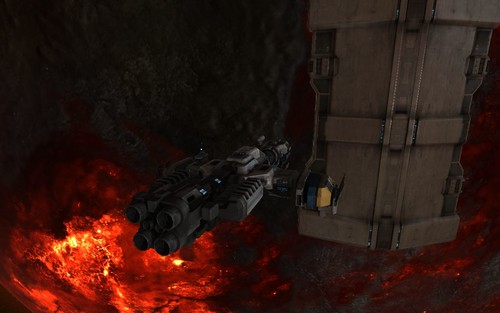 It’s a wonderful detailed model. The part just under the ‘cockpit’ moves around. It would make a nice dedicated salvager or exploration ship !

As it is now, with 100 m3 cargohold, 1000 m3 for planetary commodities (which fills up fast when you use p1 parts) and 1600 m3 for command centers, it’s not all that useful. Maybe for new players who don’t have hauler/industrial ship skills yet. A simple badger will be better than this one, but you won’t look as industrial as this ship does !

6 thoughts on “The Primae”