This month’s topic comes to us from Mynxee of Life in Low Sec. She asks "Alts and Metagaming: Is playing two accounts who are logged in at the same time and work together (hauler/miner, explorer/combat associate, trade alts in trade hubs) a form of metagaming that is ‘ruining the game’?"

This might be true in other games, though I cannot think of a good example at the moment. But in Eve itâ€™s just very handy to have a sidekick ! Also the game lends itself much better than other mmorpgâ€™s. The client is not too heavy on the computerâ€™s resources and you can easily run 2 or even 3 windows at the same time. Windowed mode works fine, so you can easily switch between them. Furthermore, a lot of activities where you can use an alternative character, arenâ€™t too stressful that you have to keep your eyes and hands on the keyboard all the time, like in some other games where you need to press keys all the time and have to resort to technical utilities and tools in order to sync your movements. 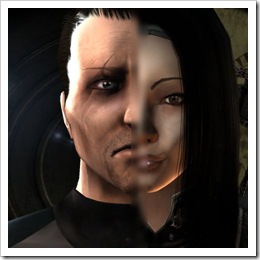 So for what purposes do you use another account ? Quite a few possibilities come to mind. From my own experience, the idea behind my alt was to pursue another career in Eve and have her go another direction. A combat alt who would do pirating and maybe even go to 0.0, while Morph was missioning and doing industrial stuff in Empire.

But somehow that plan never worked out. The combat part did though, she can fly Gallente, Caldari and Amarr ships very well (Minmatar are next on the list). But she now aids me in missions, and hauls in mining or does some other transports for me.

Another good usage is Factional Warfare. A fw alt to get the grips on pvp, who is financially supported by the main is a nice way to go and enjoy other areas of the game. I did this for a while and it works out fine.