A series of events have lead CCP and the Eve players base into an NGE like situation. How did we get here ? First of all several pretty lacklustre expensions in a row. Then we got the â€˜18 month halt because weâ€™re developing a console gameâ€™ disaster last year. Then this year we had the â€˜Dust is ps3 onlyâ€™ debacle, followed by a $99,- for a website license devblog.

And in the last few days we got the badly coded Incarna, which fried some peopleâ€™s pcâ€™s and made a lot of people wondering why CCP spent three years developing an empty room with a screen. Furthermore the few vanity items (all five or six) were ridiculously expensive !

So far a lot of people were upset, and some threadnaughts appeared on the forum. Some people might have canceled, or at least canceled alt accounts. People demanded the old ship spinning screen back and all that. The situation wasnâ€™t very pleasant. 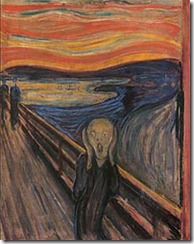 Then on the night of the 22nd of june, an internal bulletin was leaked. Apparently some people like Mynxee and Teadaze had already seen a similar one, and confirmed that it might very well be legit. A little later that night it also appeared on the forums (well links to the news article).

What exactly was wrong with the bulletin ? I think it was especially the tone of voice ! It made us, the eve players look like cows that can be milked for cash. Especially CCP_Soundwave came across as a money hungry Lead Game Designer, coming up with all sorts of weird plans to make people buy stuff from the NEX shop. Ammo, ships, it could all be bought with cash.

Then we got to a point where people expected some sort of response from CCP, and until now we still havenâ€™t gotten a proper response. Just a â€˜bear with us, weâ€™ll make a statement soonâ€™ thing, from a PR person I had never heard of.

So there you go, Eve on the brink of disaster. Most of the older vets saw this coming from a mile away. Even on this blog in early 2010 I posted a â€˜I am concernedâ€™ post. CCP has taken a different direction the past few years, since they are trying to develop two new games, financed by Eve players. I think this has turned out to be a little too expensive and theyâ€™re a little strapped for cash, but that is pure speculation !

UPDATE A pretty insulting devblog that was supposed to address the issues people have with the current direction CCP is taking actually said absolutely nothing… I guess CCP doesn’t care any more for the existing playerbase and is on the hunt for the new one that does not exist.

2 thoughts on “Eve In Turmoil”