Welcome to the continuing monthly EVE Blog Banters and our 49th edition! For more details about what the blog banters are visit the Blog Banter page.

What is “rich” in EVE? Is it simply having more ISK than most everyone else, is it measured in raw numbers of some other ethereal quality? Can you actually be poor? Have you ever lost nearly everything and had to claw your way back? If you are rich, how do you know and how did you get rich?

There are two types of players, those who see Isk as a means to get to their goal, and those that see Isk as the ultimate goal in game. They play to see their wallet / assets grow, the other group uses said Isk to buy ships and blow them up.

Ok itâ€™s probably not that black and white, but most players would probably fit on one of these two groups. Rich for me in Eve is when you can easily afford the equipment you would like to buy and can replace all your gear without breaking your own bank. 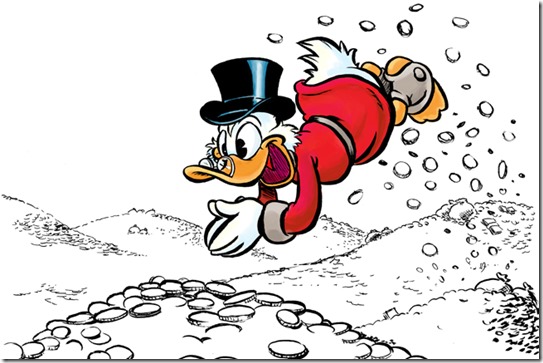 If you have been playing for quite a while, ISK starts piling up. So do all the assets to be honest. I mainly kill sleepers and do PI in our wormhole to get my income these days. Before that I ran missions, and made a bit of isk on the side, inventing T2 drones and various modules. Never on a large scale though. Think the largest run of drones I made was about 100. There are people out there who have several production / invention alts and produce 1000. So those people will be richer than I am.

However itâ€™s still gratifying to see your stuff being sold, and see your wallet grow, even after all these years. When I started out back in 2005, everybody was pretty much poor, compared to todayâ€™s standard. People had to save for a battleship, think I had to run endless Level 3 missions to finally be able to afford a raven and so on. Never lost it all though, I might have lost a mission ship once and had to drop down a level in order to replace it, but thatâ€™s about it.

Reading the various participants entries it seems Isk and being rich is very relative in Eve. And thatâ€™s probably the only conclusion you can make from this blog banter