This past week I finally found a few useful radar sites. The magnometric ones are very crappy. If youâ€™re lucky you get 50k of bounties and a few salvage bits and pieces. The radar ones are handy though, you get the invention decryptors that you can either sell, or use for your own invention jobs. The gravimetric ones can be nice, as long as itâ€™s not a small belt, the rocks are so tiny in there, they pop with almost one hulk cycle. As you can see below on the somewhat spooky image, I also found a large kernite / omber belt that we mined clean ! And when I say large I am not kidding. The omber rocks were of the gold and silver variety and all had 30k omber in them. The kernite wasnâ€™t too bad either. 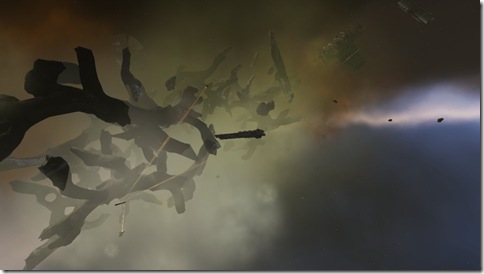 Now with Apocrypha 1.1 though, scanning has become a bit of a chore. The new sphere graphics literally make my eyes hurt after a while :(. Thatâ€™s a shame, because the other improvements, like the id tag, are very nice. I hope they reverse that decision. How that ever made it past Q&A is beyond me to be honest. Just use it for a while and youâ€™ll see that itâ€™s not exactly an improment. Same goes for the POS shields by the wayâ€¦