Last Blog Banter we talked about heroes in EVE Online. The follow up to that topic has been provided by Wilhelm aka The Ancient Gaming Noob:

Write about somebody who is “space famous” and why you hate/admire them, somebody who isn’tÂ Â  space famous but you think should be or will be, or discuss space fame in general, what it means,Â Â  and how people end up so famous.

I’d like to add another take on the subject, is there a cost of being famous in EVE and if so, is it worth the price?[/stextbox]

Letâ€™s start with the space famous person ! I have picked one of the most (in)famous pirates of Eve, Mynxee. She used to run a woman only pirate corp Hellcats, and was part of CSM 5. I always enjoyed her blog, life in low sec, about the pirate life. The blog is empty now, but there is a snapshot at archive.org. She left Eve in 2011, but has recently returned to the game. A new blog is over at blogspot. 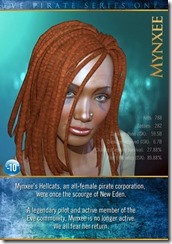 Mynxee was part of the Eve blog bubble, and always contributed on other blogs by leaving comments. Also she gave her all in CSM 5, though I think it left her a little disappointed.

You can find an interview from 2010 at massively, which is still a good read !

Ok and now onto the not famous person. Of course my first response was Akely ! But I have already named him here more than enough, letâ€™s not praise him more and get it to his head. Nope, this time Iâ€™ll go for Geddonz. This 20 minuter does it all. Mainly in Factional Warfare (with an alt, in true Eve style), he has a truckload of kills. But he also manipulates markets, flies in wormholes and maintains POSes in order to do his alchemy, and other industrial activities. And heâ€™s always helpful and willing to lend a hand, with a wealth of Eve knowledge. /tiphat to you, sir.

Now regarding that last part of the initial topic, I am sure being Space Famous â„¢ can be a nuisance. If you pvp, you might get targeted first. Also receive weird Eve mail, and maybe get annoying real life email. I can’t say I know much about it. Back in the haydays of EveBlogging, I sometimes got a â€˜Hey there Morph, I read your blog !â€™ in local when I still dwelled in HiSec, and blogs got more reading, but thatâ€™s just about as far as my fame went. Never had any trouble with stuff I posted on here. Although I do tend to be a bit careful with what I post, and what kind of info I might give away.

Thatâ€™s it for this BB #55, quite a nice topic, more participants at Ninveah.com.